I found some A4 magnetic glossy sheets for inkjet printers. I wanted to see if i could print out the Battle Tiles at 2 inches vertical hexes. This way it can be a ‘mini map’ during play and I can pull out the appropriate 7 inch Battle Tiles during combat or special situations like trying to find traps and secret doors. 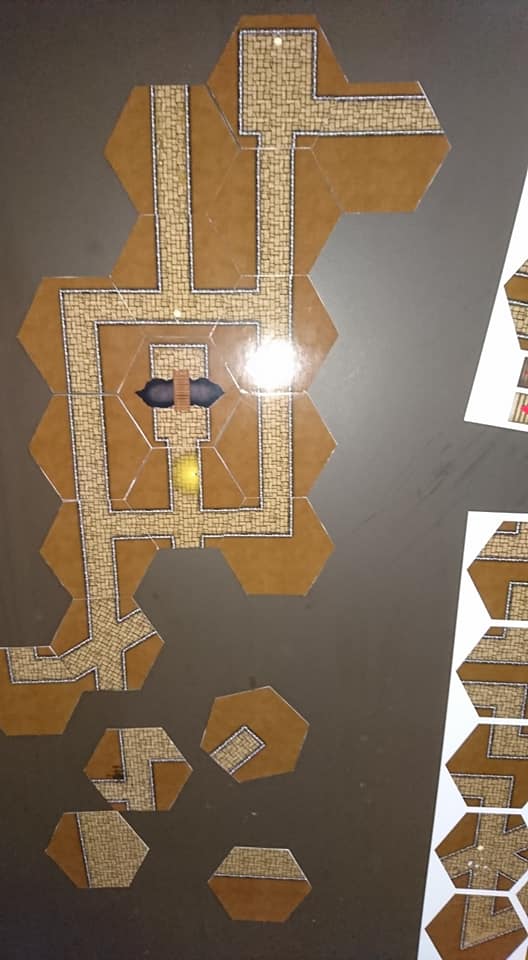 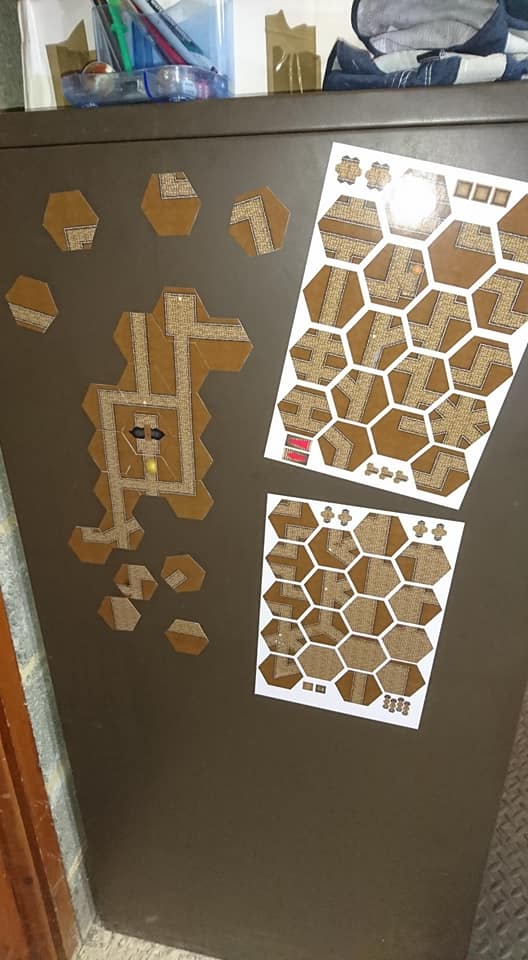 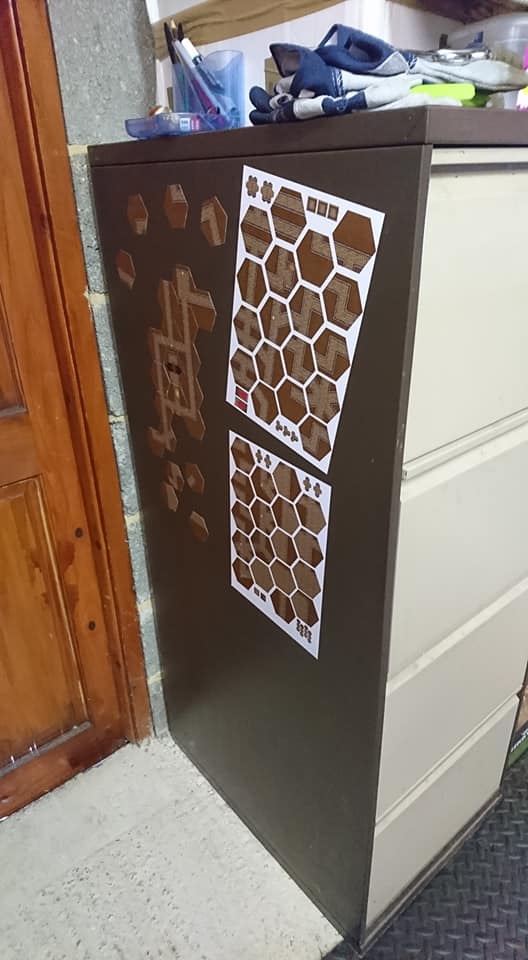 Testing them out on my metal filing cabinet.  I have a white board that we have used in the past for gaming and will be using that set on the table during play. 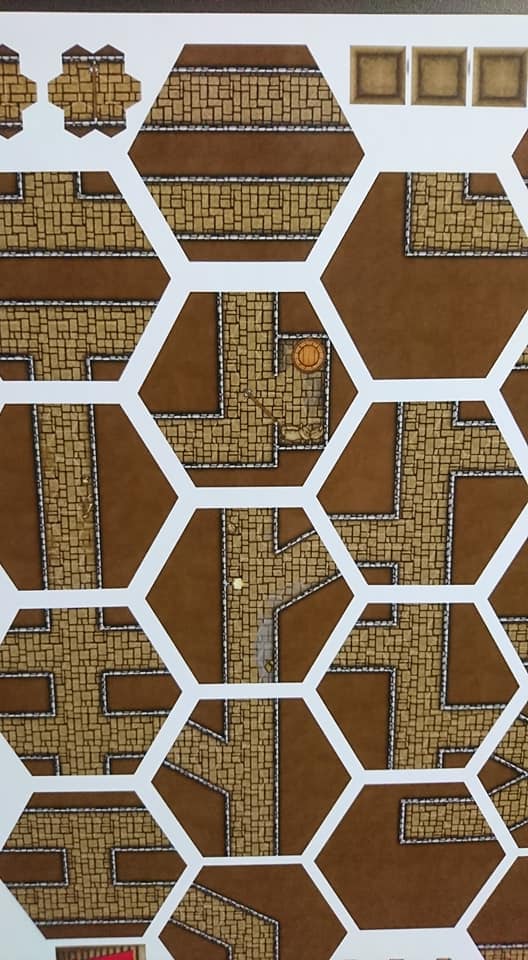 I am really pleased at the print quality that my Epson EcoTank ET-7750 was able to produce on these glossy magnetic sheets.  The stairs, doors, pits, and traps are a pain to cut out but they do stick to the top of the tiles allowing me to add features to the dungeon as well! 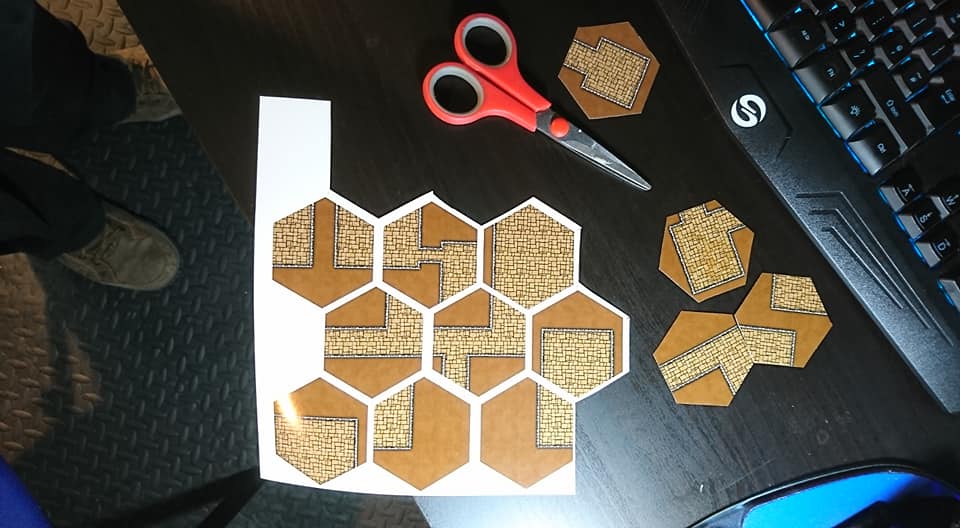 They cut better with a scissors then they did with the hobby knife. Now when we play I can place down the tiles as they explore the dungeons and they are just fun to play with on their own.

To reduce the extremely large number of tiles I’m creating I’m adding tokens around the tiles.  It may use a bit more ink but it also allows you to get more out of your photo paper as well.  The tokens will allow you to place stairs, traps, treasure, etc. anywhere you want on your tiles. 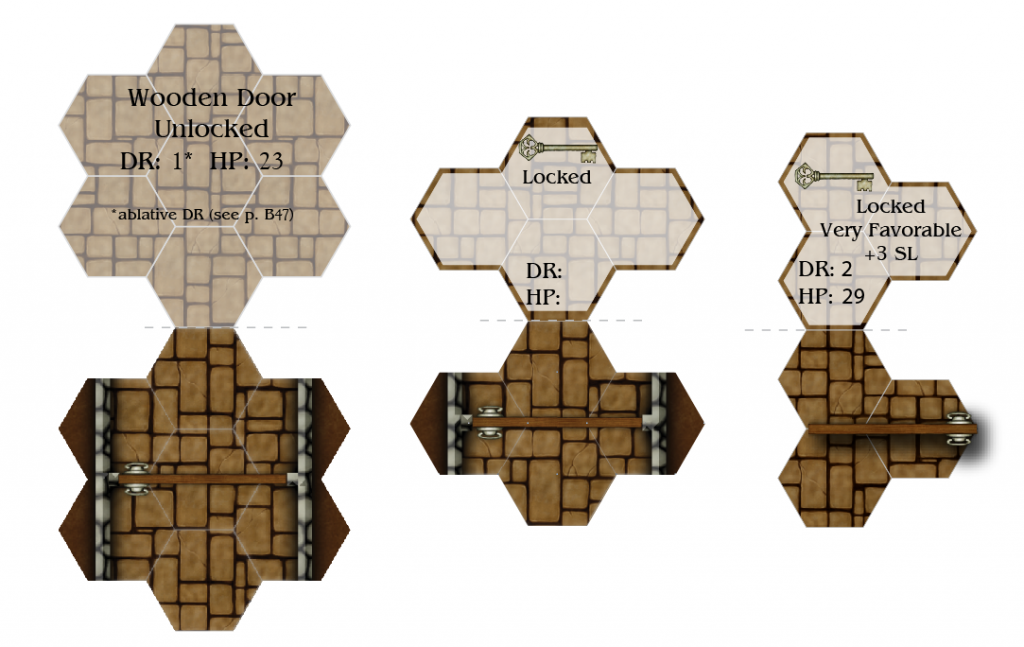 These three style door tokens will allow you place your doors within any area on the tiles for the wider Vertical Corridors.  Carefully cut them out with a hobby knife using proper safety procedures and you can then either glue one side and fold in half on the grey dotted line or cut them in half and glue them on to thicker card. The backs of the tokens will have information on the type of door.  To make this easier and more customizable for those of you using the tiles all token pdf’s will be form fillable. Which means you can enter your own data. The center token in the picture above is how they will all look with blank data fields where as the other two is a representation of how they will look with the information inserted by the user.

Test it out on this pdf for yourself!  You will have to download the pdf, Google Docs won’t let you use the form features in the preview. 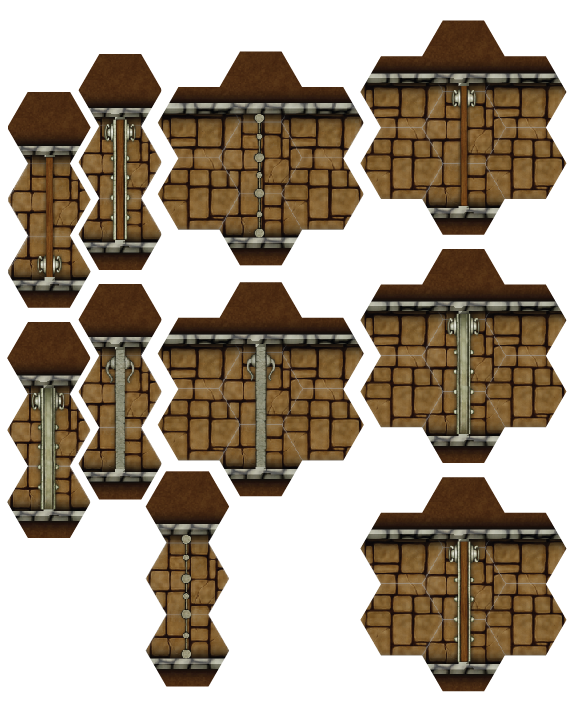 Because the Horizontal Corridors have to be slightly reduced in width I have created two types of door tokens for each door type. These also will have a form option on the reverse side. 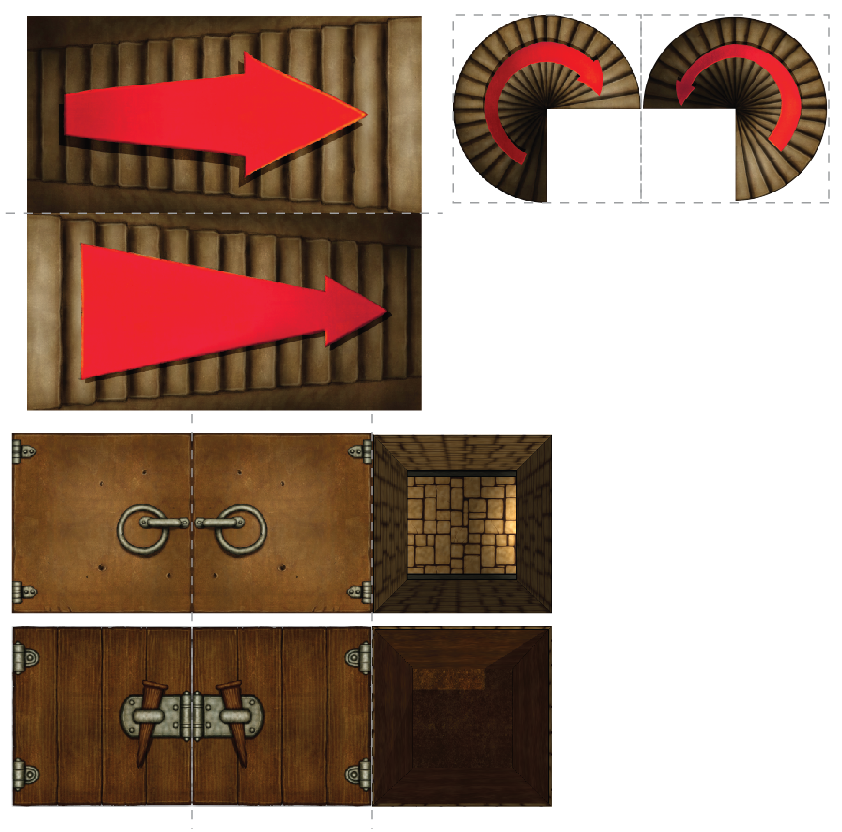 Here are some of the options you can place from getting from one level to another.  I manipulated the pit images in photoshop.  The top one is a pit down to another corridor directly below it and the bottom one is just a deep pit.  I probably should have placed a skeleton on the bottom for scale. If you fold the pit symbols on the grey lines and glue the trap door parts together then glue the bottom (pitt symbol) to a piece of thick card you can have a pit tile with a working door! 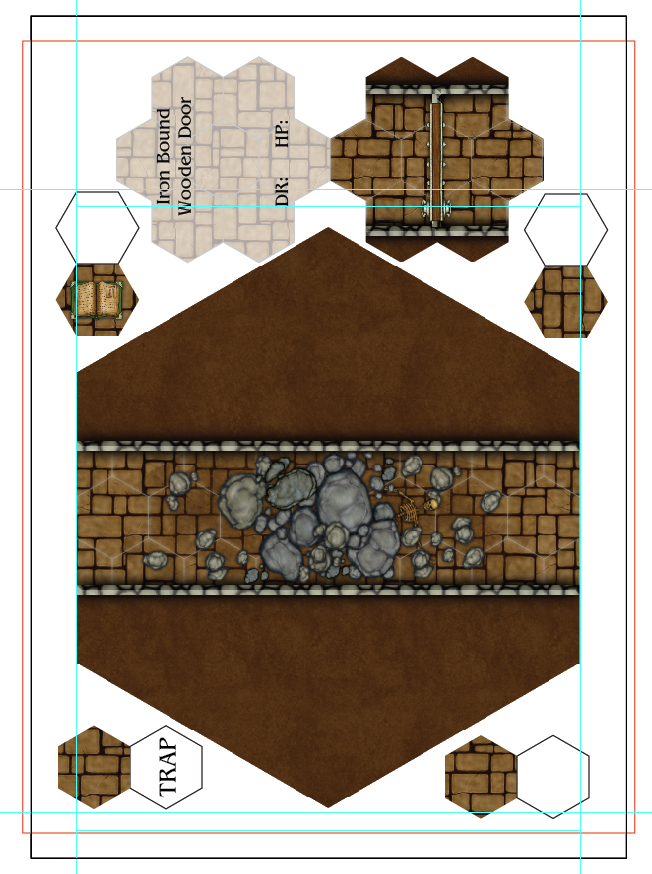 Now to make sure that the pdf’s can be used by both A4 and 8.5″x11″ I’ve placed a red rectangle on my sheet representing the size of 8.5″ by 11″. This will make sure none of the pieces will be cut off due to size. Everyone will have to print them with no margins though.

I’d like to share the 7 inch hex Battle Tiles that I made back in 2009. You can read about it HERE on the Profantasy forums.

You can get them HERE

For more information on the battle tiles click on the tags to other posts concerning Geomorphs.

If you end up using them please share pictures and if you tend to use them often and you need a new tile then please let me know and I’ll whip one up for you. 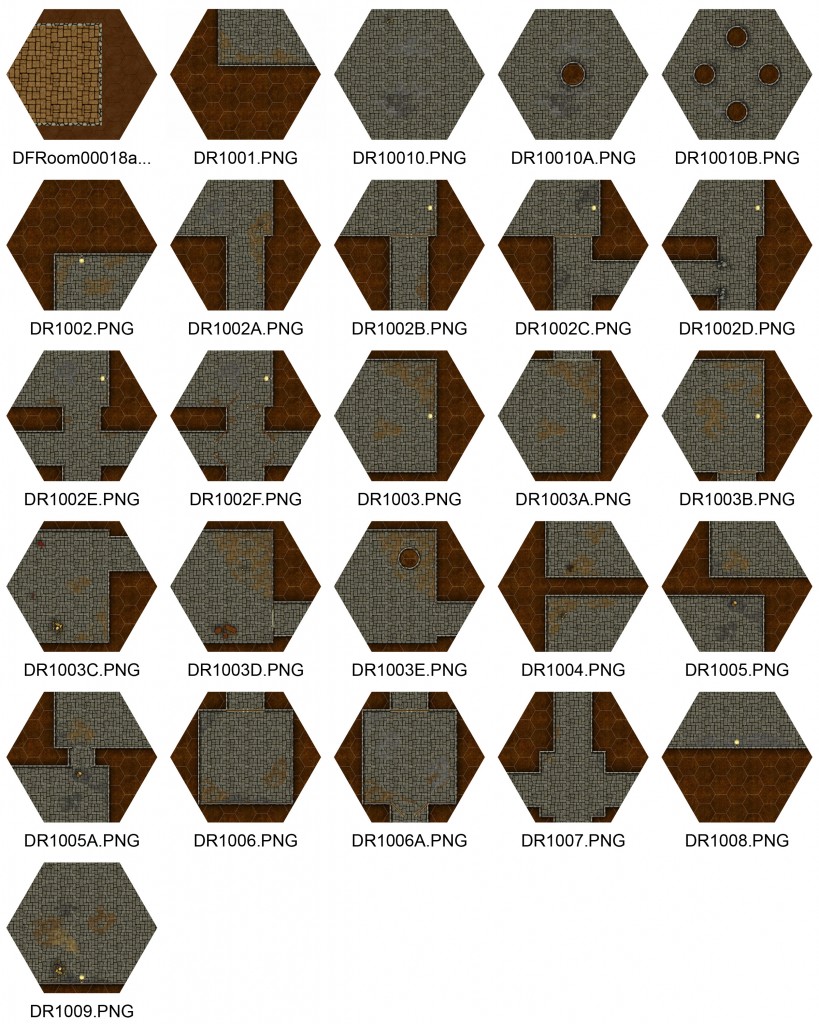 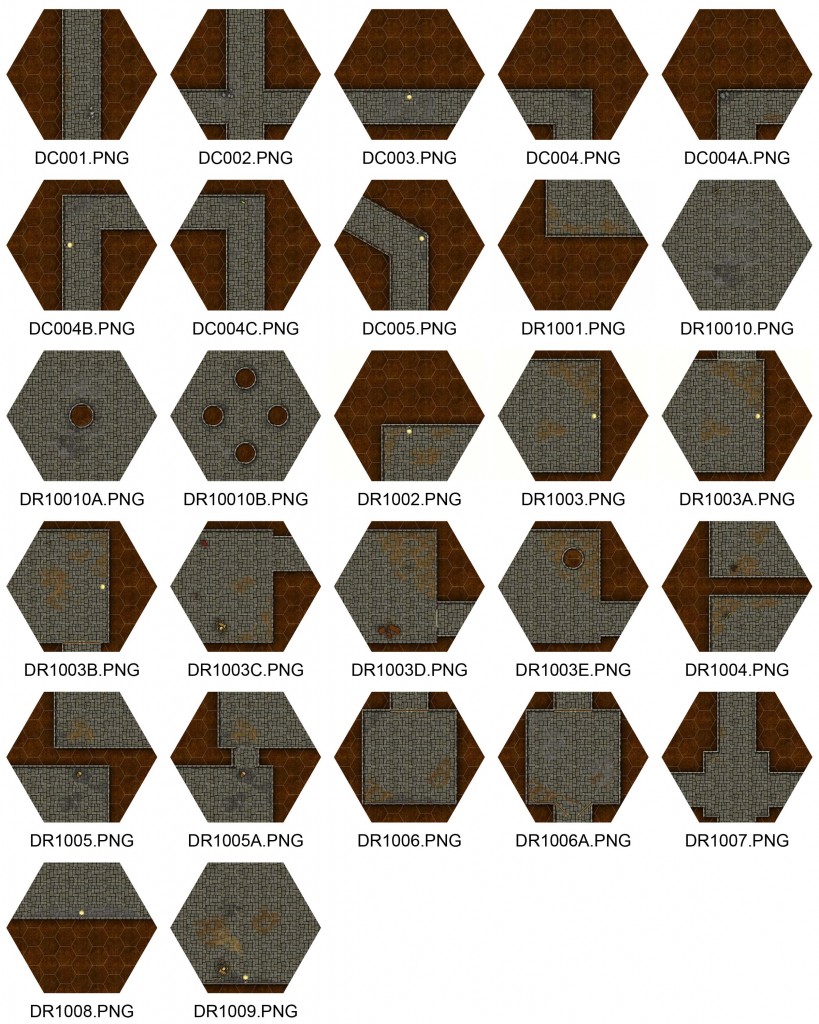 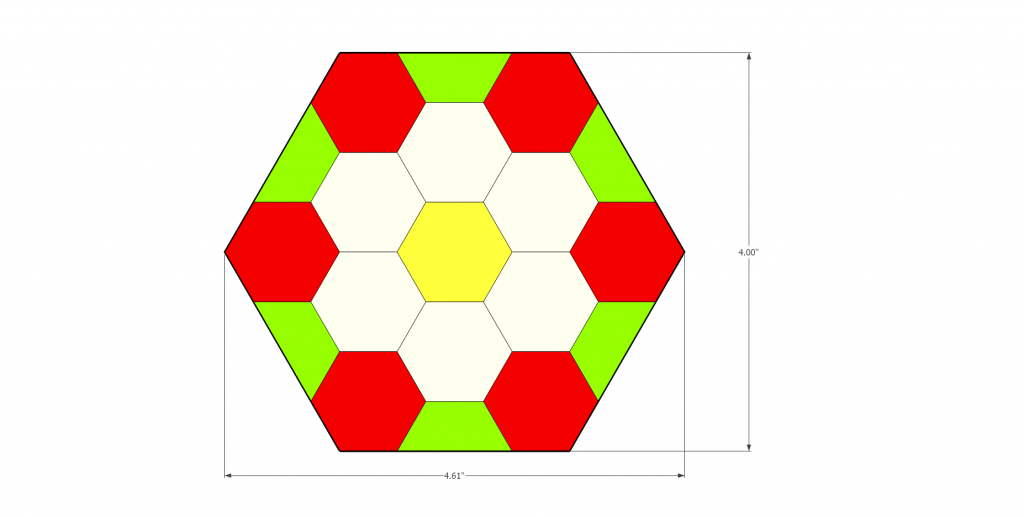 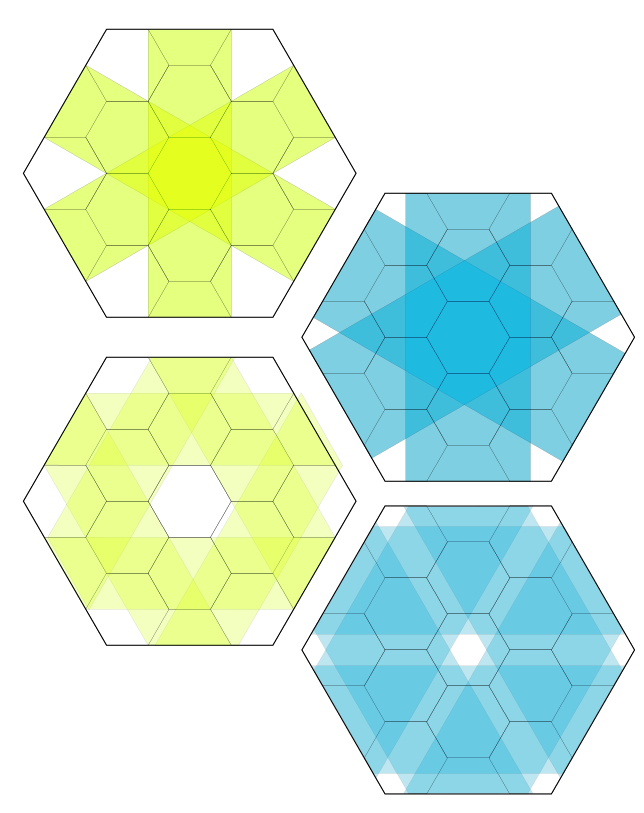 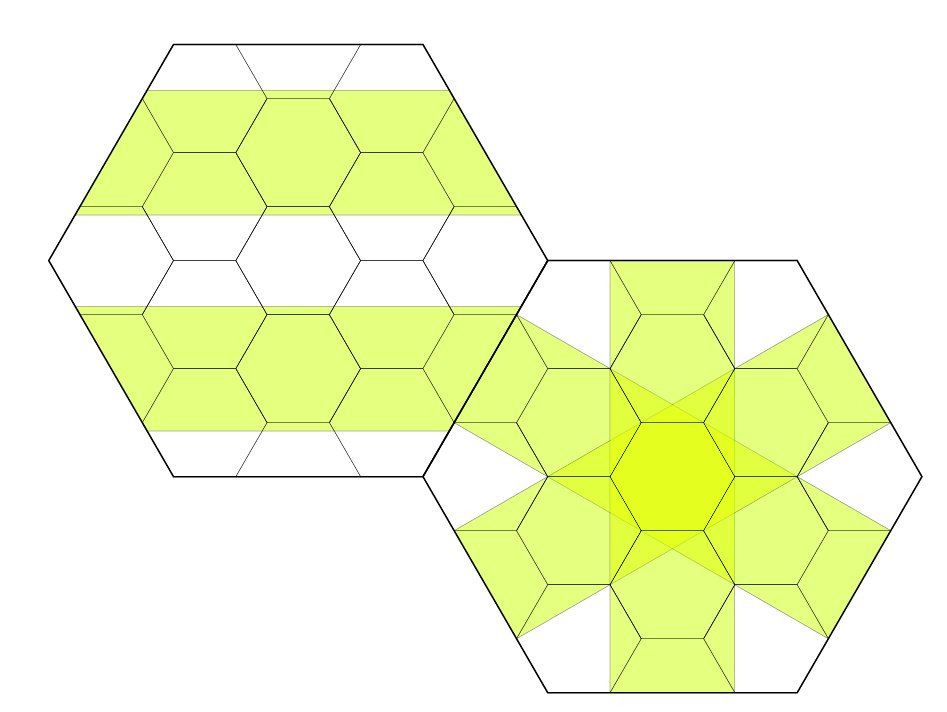 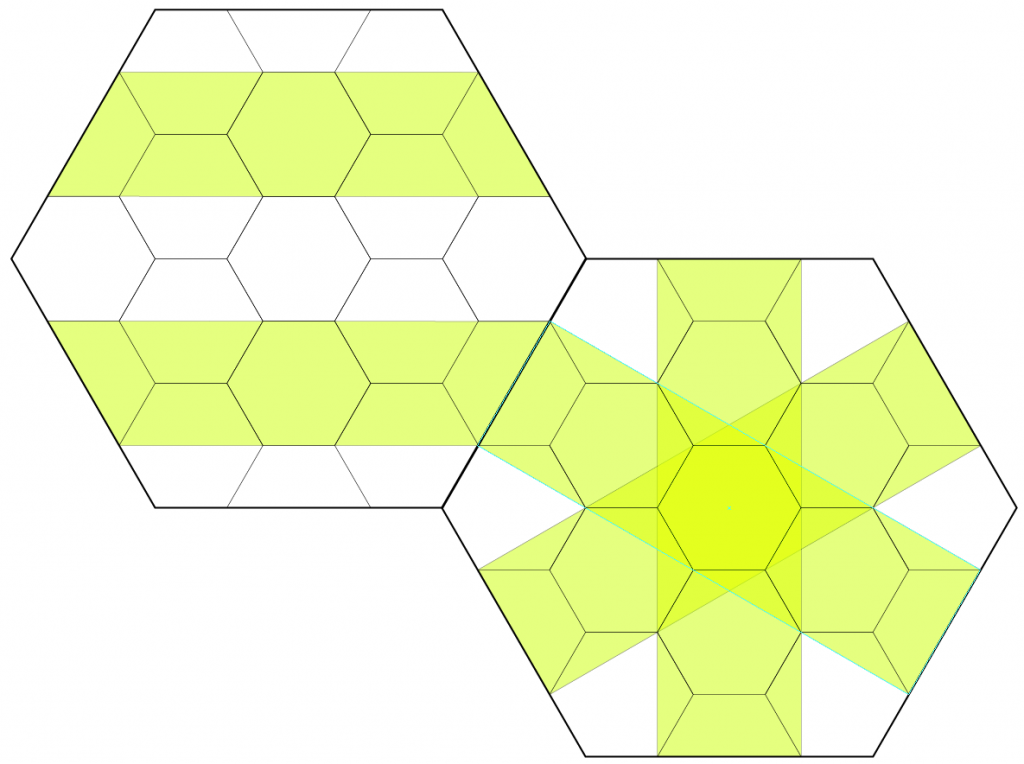 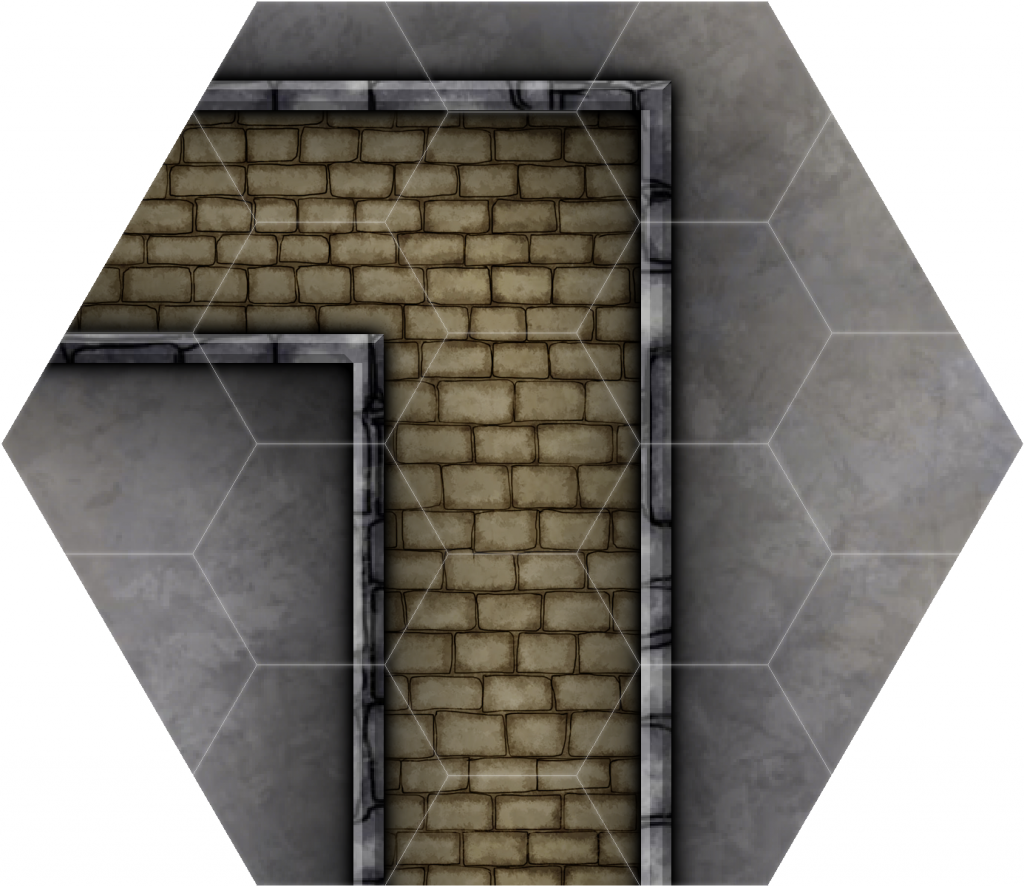 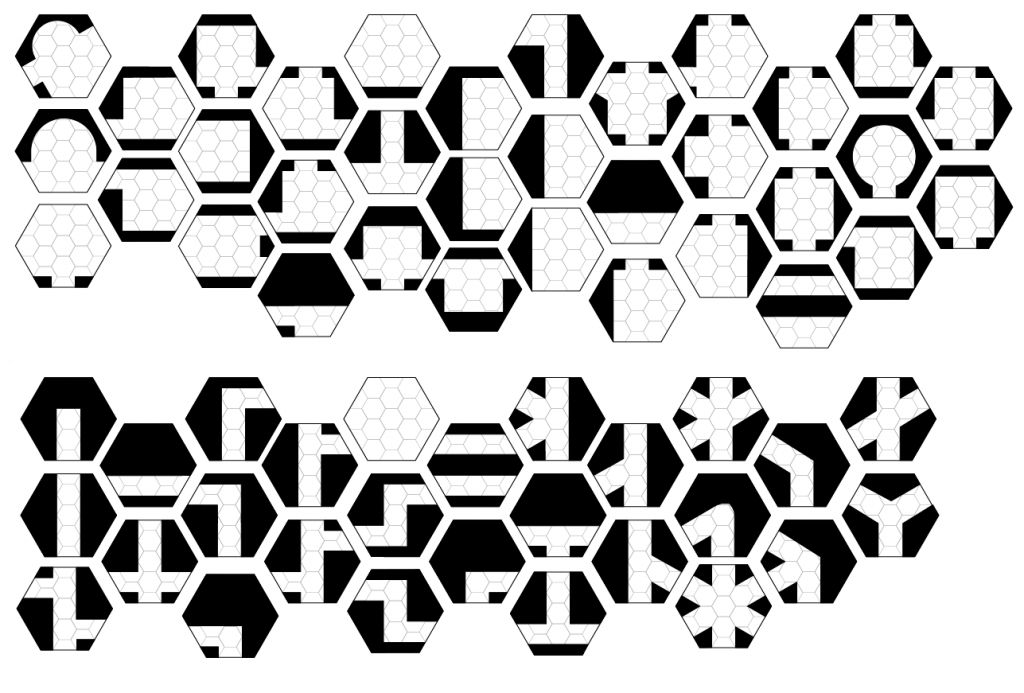 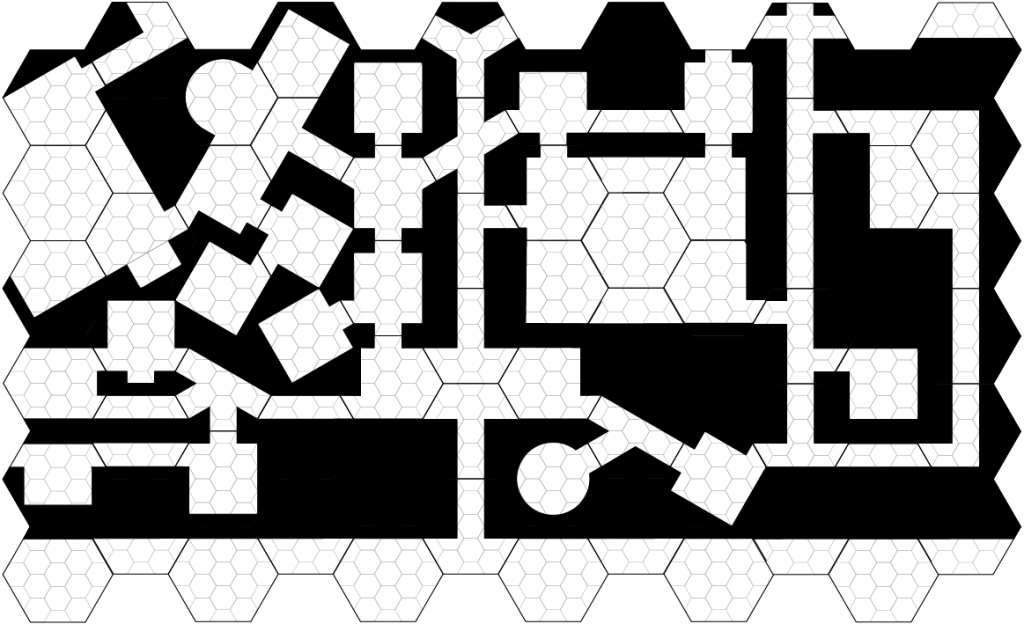 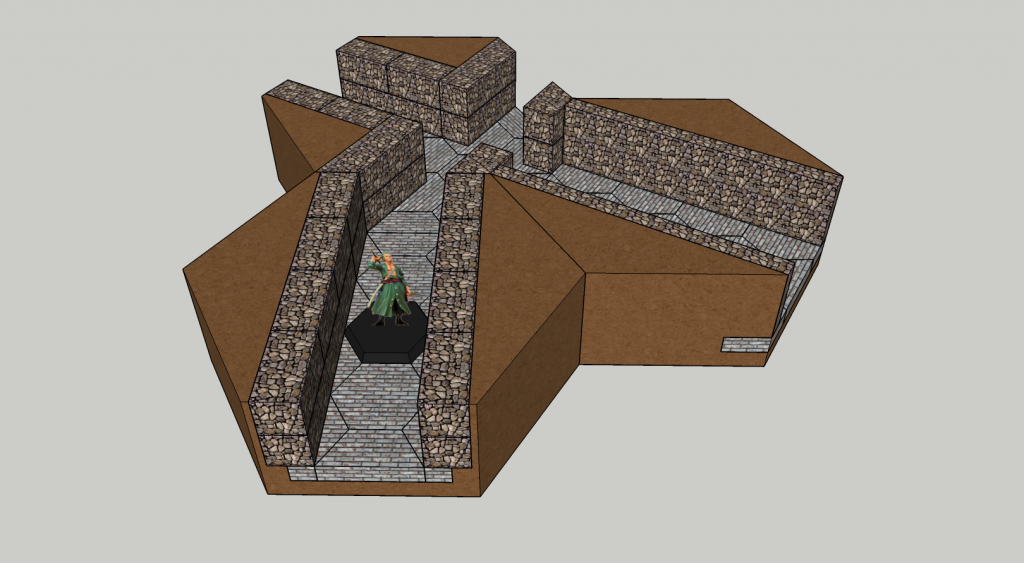 I just purchased the 2010 & 2011 Cartographer’s Annual from Profantasy Software.  I’m most looking forward to 2010 March issue which is Dungeon Geomorphs and 2011 February and June issues which also deals with dungeons.   The 2011 August issue is vertical geomorphs which I will be exploring first to give a sense of depth to this crazy Megadungeon.

Here is the revised Sewer battle Tiles for Level One of the Mega Dungeon.  The walk ways are 3′ and the water channel is 6′ 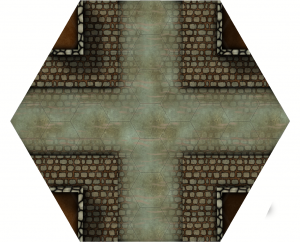 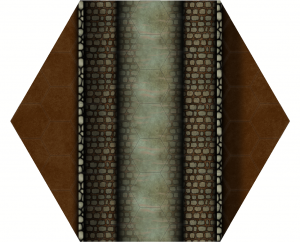 I’m still working on the CC3 Effects but I like what I have so far.  The brick pattern from the first sewer test was just not doing it for me.  I’ve had to add and move the Sheet effects around.  Here is what I have on them so far, each with one or more effects.

I’m debating on whether or not to have lighting effects.  There will be narrow water channels of 3′ with no walk ways as well. 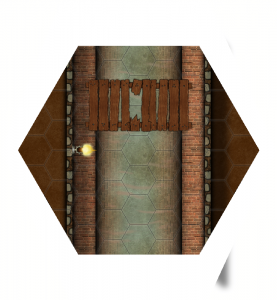 It needs work.  Probably going to have to make the sewer canal six feet instead of nine feet that way you don’t need two additional tiles for a little corner.  I’m not entirely happy with the over all look just yet.

So if you have not guessed yet level one is going to be a sewer.