I’m playing a weekly game of Dungeon Fantasy RPG powered by GURPS. We are using Roll20 to play the game and it has been a learning experience as I’ve not played GURPS in some time.

I decided to try something that I’ve never done before and I’m playing a Cleric. However I wanted to do something unique so I’m playing a Half-Ogre Cleric that uses a Bec de corbin, a type of Pole Axe (permission granted from the GM to switch Staff with Poleaxe). I’ve selected it to be Dwarven, Fine, Silver plated, Power Item with 7 FP. This will offset the unbalanced penalty allowing the character to attack and defend normally.

It has been years and years since I have been able to play GURPS as a player and it took some getting used to. That and playing with new people meant learning how to interact with their specific play styles, characters, and tactics. It has been a fun experience and has sparked a renewed interest in gaming.

It has been over five years since I used Roll20 and there have been a few upgrades since I last used it. One thing I am particularly fond of is the GURPS character sheet which really speeds up the gaming.

Of course I still much prefer to play in person as you don’t have audio issues, drop of internet, and other technical glitches. However with Covid-19, lockdown, self isolation it really is the best option. Plus there are not that many players in my location so being able to play with people at least in the same time zone is helpful! The plus side with the lockdown is more people are home and they are happy to find days to play when I have a day off as I’m still doing shift work and don’t always have the same days off from week to week.

I’ve received my Kickstarter pledge from Gaming Balistic’s “Nordlond Sagas for the Dungeon Fantasy RPG” and I’m very pleased with the resuts. I’ll make a different post about those books.

I finally broke down and ordered Amazon PoD copies of Companions 2 and Magic Items 2. Now I was extremely critical about the first Companions PoD book (read it HERE). I stick by what I said and I’m still annoyed that SJG do not even attempt to find an EU and South American publisher for easier distribution of their printed products, but I’m not an expert in these things I’m just a customer.

That being said Companions 2 and Magic Items 2 were much better quality then Companions was by a long shot. Full colour pages, better quality paper, much more what I have come to expect from Steve Jackson Games in the past.

Now the content is of both books are great resources for those playing Dungeon Fantasy RPG. Companion 2 gives 16 magical items, 6 new monsters which includes Adventure Seed ideas and the option to play a Centaur as a delver! Also 14 NPC villains with optional new Racial Templates, Advantages, Traits and a Spell. Certainly makes it worth having in your library. Magic Items 2 has 48 pages and 44 different magic items to entice or harass your players with.

Combining both books together opens a world of possibilities. I was very inspired to use Lady Aimara DFC2(50) and possibly the sword Xingyung (DFMI2 46) in a Wuxia inspired adventure.

I certainly hope we will see more Dungeon Fantasy RPG powered by GURPS in the future!

Two years ago I posted about the Steve Jackson Games (SJG) Print on Demand (PoD). You can read it here if you would like. I was pleased just to be able to get GURPS books because lately you just can’t. I’m afraid my bitterness has increased since then. The closing of Pyramid, the lack of GURPS products being released, and now the latest Kickstarter (DFRPG Magic Items 2) will only ship to the USA only. Everyone else will either have to make arrangements to have it shipped from the States to their home or purchase it from SJG Amazon Print on Demand service.

Now two years ago I thought that was great despite the black and white pages. Since then I’ve taken several courses in book binding and I can now tell how inferior these PoD are compared to normal SJG printing. Now personally I would prefer hardcover as they just last longer than a paperback but I’m being told by everyone that I’m being unrealistic.

So lets compare the PoD compared to the books that cam with the DFRPG box set.

Now the Companion is Pod and Exploits is from the box set. The covers are comparable but there is more of a gloss finish to the Exploits. They have comparable gsm (read below for gsm definition). I don’t have a lot of complaints about the covers.

“GSM is an acronym standing for ‘Grams per Square Meter’. Quite simply, it allows print buyers and print suppliers to know exactly about the quality of paper that is being ordered. The higher the GSM number, the heavier the paper.”

Now that isn’t strictly true. You can have higher quality paper in a lower gsm to a higher gsm. Mostly it lets you know how thick/heavy the paper is in a generic sense. So the paper of the Companion is thicker at 0.10 mm and the exploits is 0.9 mm thick. However the Companion is less dense or more porous. It would, in my opinion, tear easier than the paper from Exploits which is a gloss paper and better quality.

Now here is where I really get critical. Exploits is either Saddle stitched or Loop Stitched. Meaning they used some type of thread to keep the pages together in groups called ‘Signatures’. Companions is Perfect bound. Perfect Bound is when they take single sheets of printed paper (2 pages) or one sheet folded (4 pages) and bind them together with a thermal glue into a book. A very good quality thermal glue should last a few years. It is fairly flexible. A cheap thermal glue will dry out, crack and fall apart. I don’t know which type that Amazon uses but I wouldn’t push my luck by stressing out the spine at all.

As you can see from the top book, which is Amazon’s Print on Demand Companions it is a folded sheet of paper (4 pages) stacked and glued together, sparingly at that. Now the bottom book is Exploits from the box set and bound in China. You have 4 sections (roughly 28 pages), sewn together then perfect bound with a generous amount of adhesive.

So what it comes down to is that if SJG is using the same printers then those in the States, or able to get ahold of the Magic Items 2 books being shipped to the States will be getting a better quality book for $18. How much will those outside of the U.S. be charged for an inferior PoD? Companions is $19.95 for 78 pages. That is only 30 more pages then the Magic Items 2. So those in the States get the PDF and the print book for $18.00 but those of us not in the U.S.A. Have to pay $10.00 for the PDF then probably another $15.00 for the PoD which will be a less quality product for much more.

Maybe if they put as much enthusiasm into GURPS as they do trying to resurrect Ogre and Car Wars of even half as much effort as they do Munchkin they might have better success trying to get GURPS out to a new generation of players. It won’t work if they start out with making it inaccessible.

This isn’t a criticism of GURPS Dungeon Fantasy but of SJG and it has only been increasing over the years do to the lack of effort and attention given to GURPS. Yes I’m bitter, I may or may not be reasonable in my criticism but customer expectation is what decides a chunk of sales. It’s just my opinion.

Although nowhere on the Kickstarter page mentioned the PoD version of DFRPG PoD would be colour instead of black and white like all the other SJG PoD, Phil Reed has confirmed it will be available in colour

The book is color, yes, both when as a Kickstarter reward item and when ordered through the ongoing GURPS On Demand program that is described here: http://www.sjgames.com/gurps/ondemand/

It has been a really good month for Dungeon Fantasy RPG powered by GURPS! Not only are we getting Monsters 2 but Douglas Cole of Gaming Ballistic, the man who brought us “Hall of Judgment – a Dungeon Fantasy RPG Supplement” has his second book that has been funded “The Citadel at Norðvorn”. It is time to sharpen your sword and return to Norðvorn! 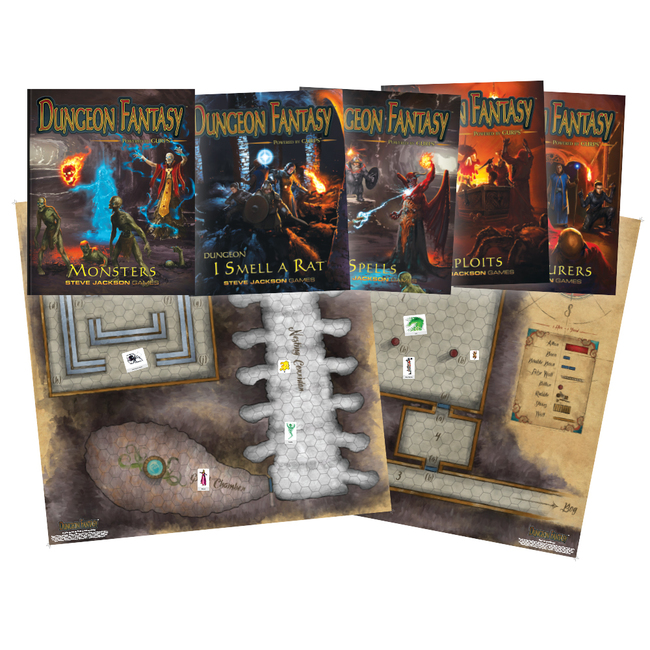 Just select your preference from the drop down box.